Interview: European Standard for Cargo Bikes - Why and When?

Standardisation is an essential feature of any successful, international, industry sector. While sometimes constraining for companies and manufacturers, it is crucial for many aspects, including safety, compatibility, cross-sectoral integration, international market penetration. Since the beginning of 2020, there has been a DIN standard specifically for cargo bikes. A European standard is in the works.

Industry standards such as German DIN standards, European EN standards and international ISO standards are intended to support the safety of products.

The application of industry standards by manufacturers is voluntary and can be carried out by specialized testing laboratories or own tests. Like all other products sold in the EU, the European product safety laws are legally mandatory for cargo bikes. This includes CE marking for pedelecs.

In an interview with cargobike.jetzt Erik Driessen from the Dutch cargobike manufacturer Urban Arrow and Joost Witsenburg from the Royal Netherlands Standardization Institute (NEN) explain why a European EN standard for cargo bikes is helpful and how it arises.

cargobike.jetzt: Why do we need a European Standard (EN) for cargo bikes? And why did Urban Arrow and NEN choose to take leading roles in developping it?

Erik Driessen: Product safety is a very important aspect for cargo bikes. A fully loaded cargo bike – especially when used for kids transport or as work equipment for employees – needs to meet other standards than existing standards for bicycles that are constructed to mainly transport their riders. The international ISO standard for bicycles (ISO 4210) even excludes cargo bikes from its scope. 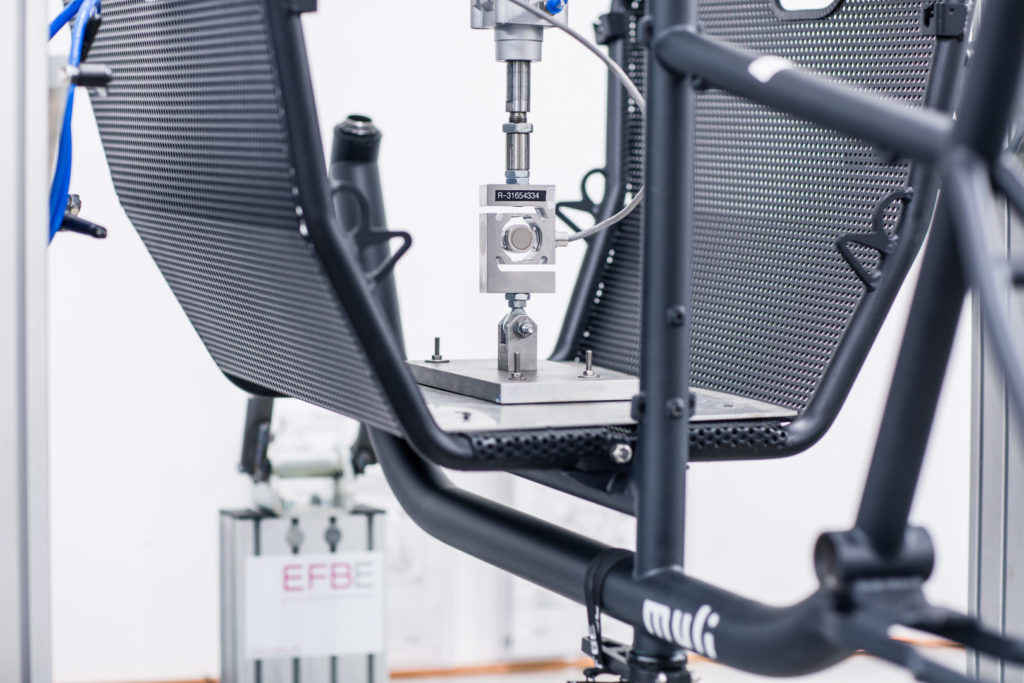 The European Union’s product safety regulations make CE certification for e-bikes obligatory. This requires manufactures of e-cargo bikes to document proof that their product fulfils all relevant aspects of the EU Machinery Directive and the Electromagnetic Compatibility (EMC) Directive. This proof is quite a challenge. And this is where a European Standard comes in. A standard provides acknowledged test methods to ensure that legal requirements are met and a product is safe. As a cargo bike manufacturer we are very interested in having such test methods.

And finally, it is in our interest that experienced cargo bike manufacturers are strongly represented in the working group to ensure the best possible standard. With the practical experience Urban Arrow gained over the years, we felt obliged to contribute to the development of the European Standard for cargo bikes.

Joost Witsenburg: After the national standardisation bodies of the European Standardisation Organisation (CEN) approved the initiative for an EN for cargo bikes, Dutch stakeholders asked NEN to take up the working group Secretariat. Personally, I was very happy to become part of this project: I own a cargo bike, and use it every day, so this standard is easy to relate to and fun to work on.

cargobike.jetzt: Who are these stakeholders and who are members of the working group?

cargobike.jetzt: The new German DIN standard does not cover transport of small children who can’t sit on their own and cargo bikes with a maximum total weight over 300 kg. The new French standard covers cargo bikes with up to 650 kg maximum weight and also trailers with electric assist. How about the scope of the future EN?

Erik Driessen: For risk analysis, which is at the basis of standard development, the scope is important. The variety of cargo bike models (including for heavy load) and of their use cases (including transport of babies and elderly) is growing fast. While the scope of the EN should be as broad as possible it can’t cover every single model and use case if they are rather rare and add too many technical challenges to the standardisation process.

There is one clear limitation to the scope by definition: The working group belongs to the European Standardisation Organisation’s Technical Committee for Bicycles (TC 333). So the EN can only cover cargo bikes within the EU pedelec regulation: max 250 Watt nominal continuous rated motor output and no electric pedal assistance beyond 25 km/h. This limit to the motor power de facto also limits the EN’s scope for a reasonable total maximum weight for cargo bikes.

The working group will discuss the scope limit regarding the total maximum weight in its next meeting and will consider all perspectives. Also the issues of baby transport and of trailers with overrun break and electric assist have been raised in the working group already and need to be discussed and decided.

cargobike.jetzt: In Germany, it took over six years from the first meeting to the publication of the DIN standard in early 2020. How long will it take to  develop the EN?

Erik Driessen: Developing industry standards is indeed time consuming. Yet, with the new DIN and Afnor standards for cargo bikes there is a good basis to start with. I hope we need much less than six years!

Joost Witsenburg: Usually, developing a European Standard takes around three years. The drafting process in the working group is based on consensus – all members, often with different backgrounds and agendas, need to agree before a text can be published. This takes time.

There are also two formal stages (Enquiry and Formal Vote) where a draft EN is shared within CEN and with national standardisation bodies for comments and final approval. The comments received are evaluated by the working group, and the standard is updated accordingly. Those steps also take a couple of months each. But the process ensures the broadest possible consensus of all stakeholders.

cargobike.jetzt: Are additional cargo bike manufacturers and other stakeholders welcome to join the working group? And what does it need to join?

Joost Witsenburg: Yes, additional stakeholders are welcome. I recommend to join the working group early in the process – this allows to take part in all discussions and decisions. You become a member trough your National Standardization Body (NEN in the Netherlands, DIN in Germany, Afnor in France, …). You can also contact me as the secretary of the working group and I will help you to get in touch with the right people. Membership rules for national standardisation bodies vary from country to country; there is usually a membership fee involved.

Erik Driessen: I strongly encourage all cargo bike manufacturers to get involved in the standardisation process – be it on the national or European level! Manufacturers know best about what cargo bikes are used for and what is the rapidly developing state of the art in their production. This state of the art often differs from the broader bicycle industry – including manufacturers of components. This is exactly one of the limiting factors we need to get rid of by jointly developing a reasonable European Standard for cargo bikes. It will bring production and product safety for cargo bikes on the next level and help the market to grow further.